My Roman Holiday: Day One

I have finally made it to Rome!  One of the great things about working for an American company in Italy (other than the fact that I get to live in Italy) is that I get a paid vacation day for every American federal holiday.  I used this long weekend to finally make a trip to Rome, the city I have been dreaming of since Mrs. Shaffer’s Latin class in high school.

I took the afternoon train from Padova.  It is a 3 hour 18 minute journey with only a few stops.  As soon as I got to Rome I found a taxi to take me to my hotel.  I grossly overpaid for the taxi, but I prefer that to lugging my bags around a strange city getting lost for hours.  On the way to the hotel I chatted with my taxi driver.  He spoke no english and I speak only a little Italian and I sound like a drunk toddler when I speak Italian so it was a disjointed conversation to say the least.  I noticed a lot of Roman streets are named after dates.  For instance one street was name 20 September; I asked my driver if 20 September was important and he said “Yes, of course it is important, it is the name of the street.”  Alright then….

My hotel is not really a hotel, it is a room for rent run by nuns.  Convents and Monasteries in Rome bring in extra money by renting rooms to travelers.  The rooms are sparse but clean, and most importantly, safe.  Here is a picture of my room. 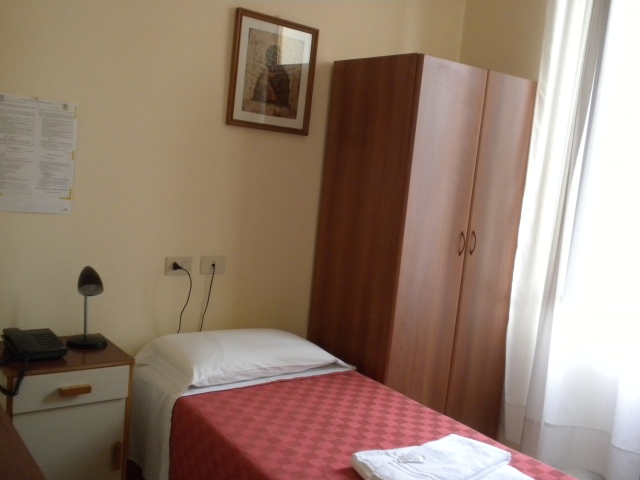 The room overlooks the Piazza Madonna de Monti, a small square with a few restaurants and a central fountain where people like to gather.  The curfew at the convent is 11pm, if you are not in the building by 11pm you get to sleep outside.  I don’t mind the curfew since I am not much of a night owl, and the locked doors make me feel safer since I am traveling alone.  Best of all, I am about three blocks away from the coliseum!!!

After I dropped my bags off in my room I walked down to the coliseum to catch the hop-on-hop-off bus.  The double-decker bus works its way around the city with stops at the major sites; you buy a 24 hour or 48 hour pass so you can jump on and off whenever you want.  You also get a set of headphones to listen to an audio guide while you ride, cheaper and more fun than a taxi! I took the entire tour this evening to get a feel for the layout of the city.  By the time I was done with the tour I was starving so I ducked into the first restaurant I found.  It was a cute little place but it had Italian, German and Irish styles and food all smashed together, very strange.  You get a lot of Italian and German influences smashed together in northern Italy, but I thought being this far south there would be no more German influence.  The food was standard, nothing to write home about but I was hungry and it was satisfying.  After lingering a long time over my wine I came back to the room and opened the windows to the square.  I am sitting here listening to people talking and eating, cars honking their horns and an accordion playing, not at all what I am used to living in my quiet little town, but it is wonderful.  Here is a picture of the little piazza under my window

Tomorrow I am touring Vatican City and the Catacombs.  I am so excited!

This entry was posted in Uncategorized and tagged Italy, Rome, Travel. Bookmark the permalink.

1 Response to My Roman Holiday: Day One