As fantastic as yesterday was, today was even better.  In the morning I went on a tour of the Coliseum, Palatine Hill and the ancient Roman forum.  I will tell you all about those when I have time to write a proper post about them.  In the meantime I have pictures to show you of all the things I saw in the afternoon.

My first stop of the afternoon was the Trevi Fountain.  The area surrounding the fountain was packed with people taking pictures and enjoying the atmosphere.  Legend has it that if you throw a coin over your shoulder into the fountain you get a wish and you are sure to return to Rome.  After I threw my coin into the fountain I bought myself a gelato and found a spot to sit and people watch for a while.

Once I left the fountain I headed over to find Trajen’s Column, which has scroll work depicting a great Roman battle.  Unfortunately some of the scroll work is damaged but it is still amazing to see.

On my way to the Piazza del Popolo (the people’s square) I veered off to see the spanish steps.  The spanish steps were interesting but aside from a quick walk up the steps there was not much else to do around them.

What I found interesting about Piazza del Popolo was the obelisk in the center of the square.  It was stolen from Egypt and still has the Egyptian markings, but after Christianity became the official religion of Rome all of the obelisks had crosses put on top of them.

I had lunch at a fantastic little restaurant.  The food was very good but I fell in love with the wall coverings.  Instead of wall paper, there were wooden crate lids from wineries attached to the walls, so cool!

By far the most moving thing I experienced here in Rome was the Scala Sancta, the Holy Stairs.  These stairs are said to be the very stairs that Jesus stood on when he was condemned to die.  Helena, mother of Constantine the Great (the man who made Christianity legal in Rome) had the stairs brought to Rome around 326 AD.  The steps are covered by wood to protect them and worshipers can ascend the 28 steps on their knees. 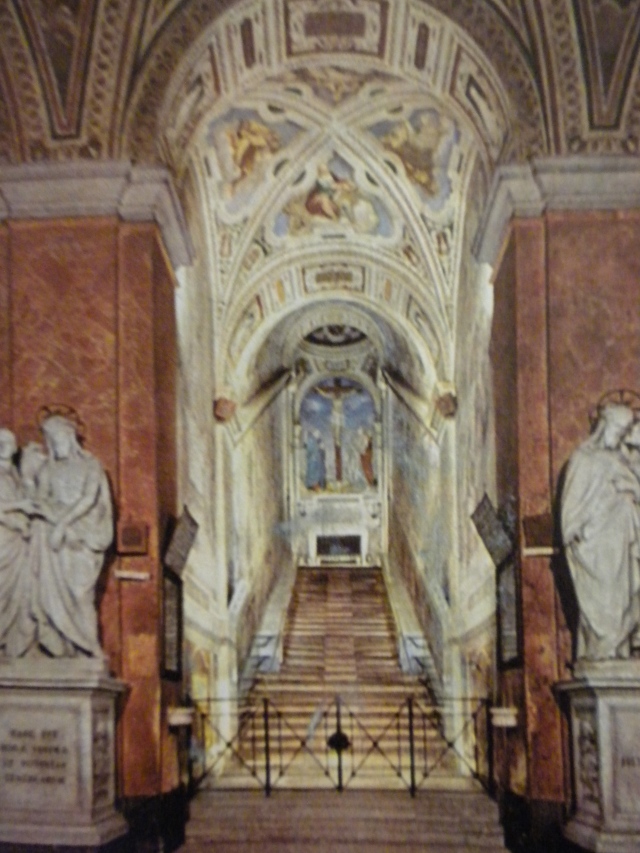 On my way back to my room I ran across this water fountain, called a nasoni (because it looks like a nose, how cute!).

To use this nasoni you just plug up the bottom hole and fresh spring water shoots out of the top hole, refreshing! 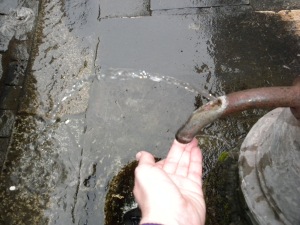 I originally intended to spend most of tomorrow in Rome, but I am a little homesick so I will be taking the morning train.  There is way too much in Rome to see it all in one weekend so I will definitely be back soon!

This entry was posted in Uncategorized and tagged Italy, Rome, Travel. Bookmark the permalink.