This weekend I went to Parma to tour the Parmigiano Reggiano and Parma Ham factories.  The trip lasted about 12 hours and 7 of those hours were spent on a tour bus driving to (and getting lost in and around) Parma.  Parma is a small city with a musical history that I am sure is super exciting.  I am sorry to say that of all the Italian cities I have been to I enjoyed Parma the least, so I dont have many Parma pictures to share.  I do however, have a lot of pictures of meat and cheese! 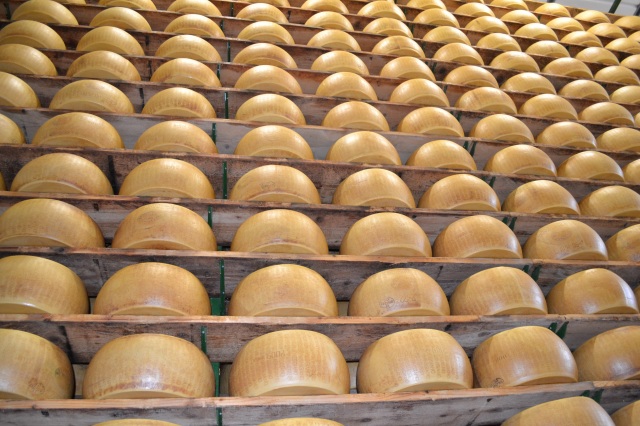 Each one of these cheese wheels weighs about 80 lbs, and  it takes 158.5 gallons of fresh cows milk to make each wheel!  It takes about 2 years to turn all that milk into the delicious Parmigiano Reggiano you can find at the store.

When the cheese first comes out of the giant cauldron that it is cooked in, it has to be flipped over twice a day.  Like this guy is doing.  Each time the cheese is flipped, the cheese cloth is changed.  You can see the old cheese cloth (under the cheese) is wet with cheese juice, and the new cheese cloth (to the left of the man) is waiting to soak up more cheese juice. Yum. 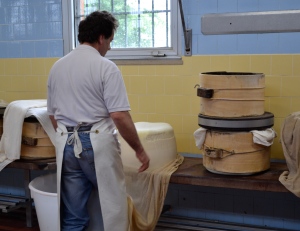 Once the cheese has been formed and the date and cauldron number is written on the cheese, the cheese goes in for a nice little salt water soak for about 20 days, like so… 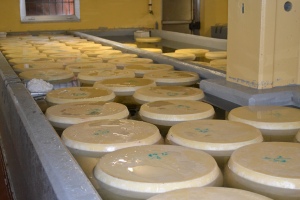 You can see the green writing on the top of the wheels is the date the cheese was made, and the cauldron number.  The cheese will continue to lose more juice during its salt bath, and the outer layer of cheese turns into a hard rind that you can technically eat, but a lot of hands will have been on that cheese rind, sooooo the choice is yours…. 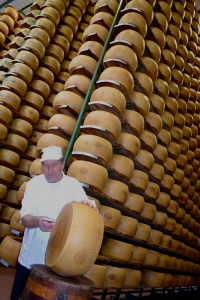 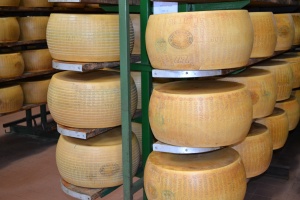 After the factory tour, we got to taste the cheese!  Which was just as awesome as you would expect it to be.  In addition to learning all about cheese, I also learned about the eating habits of pigs!  Apparently, most of these cheese making places have pig farms nearby because a lot of whey is left over at the end of the cheese making day, and it is fed to pigs.  They told us that the pigs love the crap out of the whey, and when you mix it in with their food they eat more and faster, causing them to become fat little piggies.  Those fat little piggies are then slaughtered to make the famous Parma Ham, and good times are had by all.

So on to the Parma Ham! 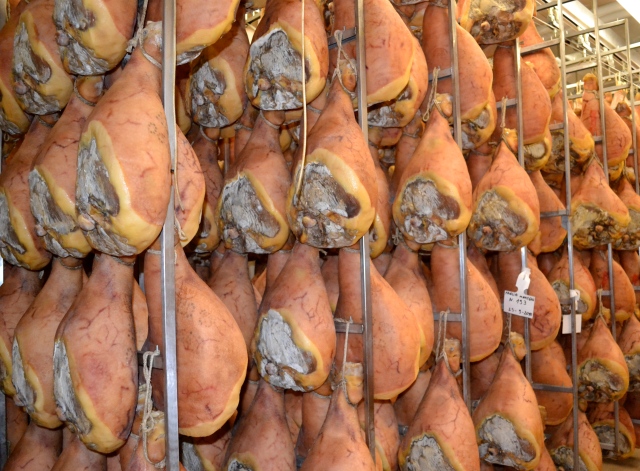 Parma Ham (also known as Prosciutto di Parma) is a salt cured ham leg, sliced thin and served with melon, figs, bread, cheese, and pretty much anything else you want.  Seriously, try it with cantaloupe, your life will never be the same.

Basically, the pig is killed and his back legs yanked off.  Then those legs are rubbed with salt and left to dry.  Anyone with a pig to spare and a year or two to kill can make salt cured ham, but to be considered Parma Ham, it has to be done in the Parma region.  To prove the prosciutto you are eating is Parma Ham, the factories put the ducal crown on their hams, like this.. 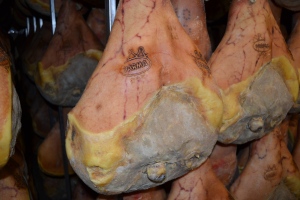 This hanging slab of flesh may not look super appetizing right now, but once you slice into it it is fantastic.  As an added bonus, you can drizzle a little lemon cream on some bread, top with slices of prosciutto, and enjoy with some wine! 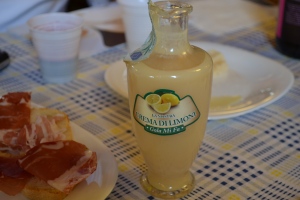 This entry was posted in Uncategorized and tagged Food, Italy, Parma, Travel. Bookmark the permalink.