Over the past few months I have phased out most gluten from my diet.  I can’t even tell you how much better I feel now that I am mostly gluten free.  For years I suffered from intense stomach pains and nausea and I could never pinpoint what was causing it, now I am pretty sure it was all the gluten I consuming.

So now that I am limiting the amount of gluten I eat I have to redesign many of my tried and true recipes.  Tonight’s redesign: Meat Pies.  My meat pies have become a standard in my cooking repertoire because they are delicious and portable and can be eaten hot or cold.  I was worried that using gluten free flour would ruin the perfection that is my meat pie.

Side Note: Every time I make meat pies I have a strong yearning to watch Sweeney Todd, and I have the “Mrs. Lovett’s Meat Pies” Song in my head the entire time I working in the kitchen.

I use Red Mill gluten free products because that is what is available here, but I am also very happy with their stuff.  The gluten free flour is made from ground garbanzo beans and it needs a thickener in place of gluten, I use xanthan gum, which can be found right next to the gluten free flour.

So here are the differences I noticed between regular flour and gluten free flour:  The gluten free flour is more difficult to work with.  I could barely knead it and after a few minutes of getting nowhere I just decided to skip that step.  The gluten free dough also did not rise the way regular dough does.  One good thing is that when I was rolling out the dough it did not spring back, which was nice.  I had to use a lot of olive oil to keep the dough from sticking but other than that the dough was fine.

I did notice that the dough does not stand up well to re-rolling out the scraps.  The first batch of pies that I made came out almost perfect, but once I started collecting the scraps and re-rolling them, they started to look a little crazy. 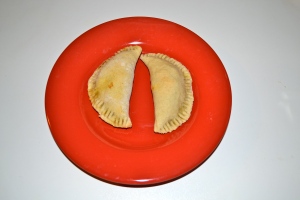 Scary meat pies from the last batch (but still tasty)

It was a little aggravating to work with the gluten free dough and by the time I put the first batch in the oven I was kind of disenchanted with my gluten free meat pies.  But then I tasted one straight out of the oven.  Holy Crap!  These things are even better with gluten free dough!  This dough is not as puffy as the regular dough so there was more emphasis on the meat filling.  I am definitely happy with this foray into gluten free cooking.

One suggestion I have if you want to use gluten free dough: work quickly and try to get as much product out of the first batch as you can, because the re-rolled scraps look scary.

This entry was posted in Uncategorized and tagged Cooking. Bookmark the permalink.